Funnel Builder Secrets review– FBS is being heavily promoted by ClickFunnels right now.  Is it really worth buying? Or is it a rip-off?

As mentioned in my ClickFunnels review, it comes with two basic pricing plans:

However, there may be a better deal for ClickFunnels that can help you save money.

Russell Brunson (co-founder of Clickfunnels) has a pretty good discount offer for ClickFunnels which he has packaged into a training program known as Funnel Builder Secrets .

If you use ClickFunnels already, you can still be a part of this cool funnel training program.

The Funnel Builder Secrets program offers extensive training, foolproof strategies, and the required tools to help your business generate ten times your investment. (You get $100 for every $1 ad.)

You’ll also learn how the Funnel Builder Secrets program is the best deal in buying ClickFunnels and why you should not hesitate to dump your current ClickFunnels monthly plan to jump on this crazy offer.

What is Clickfunnels Funnel Builder Secrets?

The program comes with a free six-month or 1-year unlimited access to the ClickFunnels Etison Suite ($297), three individual training programs ( including the brand new Funnel Builder Secrets Training, Funnel Hacks Masterclass and the Traffic Secrets Membership) and a 1-year subscription to Funnel Scripts.

What is the Price of Funnel Builder Secrets 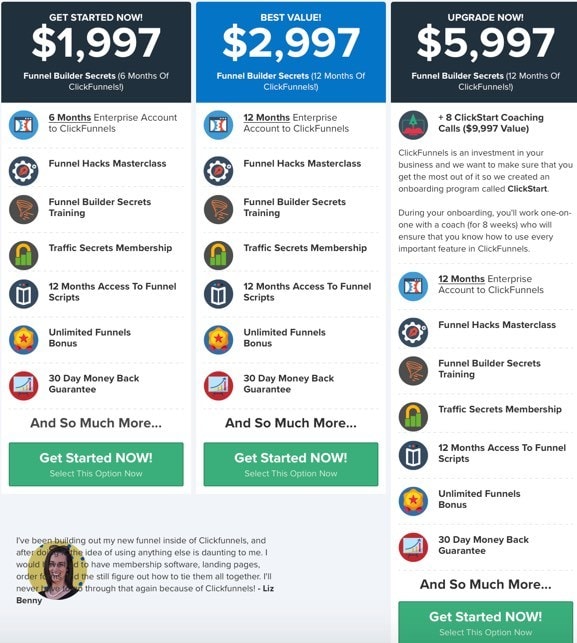 The is the lowest Funnel Builder Secrets pricing plan which costs $1,997 and gives you access to six months of ClickFunnels Etison Suite Enterprise account. To get this offer you, you can check out this inspiring webinar with Kaelin Poulin (A.K.A. LadyBoss) about how she started her own fitness empire.  By joining this plan you also get these other bonuses:

This second plan is considered to be the best Funnel Builder Secrets deal on the sales page and costs $2,997. To get this offer you can check out Russel Brunson’s famous 10x presentation for free. This pricing plan gives you access to 12 months of ClickFunnels Enterprise account plus other bonuses:

The third pricing plan costs $5,997 and gives you unlimited access to 12 months of ClickFunnels Enterprise account and eight ClickStart coaching calls ($9,997 value). To get this package you can check out Russel Brunson’s 10x presentation and select the upgrade. When you get this package you also get these bonuses:

ClickFunnels is a great investment in your business. To make sure you get the most out of it, ClickFunnels created an onboarding program called ClickStart.

During this onboarding program, you work one-on-one with a coach for eight weeks who will ensure that you know how to use every important feature in ClickFunnels.

Here is a detailed explanation of all the bonuses the Funnel Builder Secrets comes with:

Let’s look at the features of the ClickFunnels Full Etison Suite Account ($297 per month).

Clickfunnel’s Actionetics is an email marketing system that allows you to interact with all your leads and buyers directly from your dashboard. It gives you the ability to do a lot within a sales funnel system.

Here are some of the features Actionetics offers:

ClickFunnel’s BackPack is an affiliate sales management system that helps you track the stages of your deals and leads.

It gives you total control over your very own affiliate program. If you have an offer, you can get it more traffic by offering affiliates great commissions to promote it and also track the conversions properly with BackPack all in the ClickFunnels platform.

Here are the features you get with BackPack:

This means no monthly payment for ClickFunnels once you get this amazing deal.

Let’s do some quick maths:

If you paid $297/month for 12 months, that’s $3,564. This is much more expensive than buying the Funnel Builder Secrets.

For only $1,997, you will get six months of ClickFunnels Full Etison Suite for free (which would cost you $3,564 if you chose to buy ClickFunnels monthly) along with other amazing bonuses and benefits.

The Funnel Hacks Master Class is a six-week training course. It teaches lessons on how to get inside people’s funnels, how to find out which funnels are working, how much money they’re making, where you find the people to funnel hack, and a lot more.

The Funnel Builder Secrets course teaches you all the technical information you need to know before setting out to build a funnel.

The Traffic Secrets training course covers everything you need to know about acquiring traffic through various channels and driving them to your funnels.

Funnel Scripts is a software program created by ClickFunnels that helps you write all your sales copy in minutes.

You can use it to write your headlines, ads, emails, webinar slides, and more in under ten minutes.

With this software, you don’t have go through the pain and stress of hiring an expensive copywriter to write copy for your funnels because Funnel Scripts has you covered.

Normally, ClickFunnels allows you to create only about 70 funnels on the Etison Suite. However, if you purchase the Funnel Builder Secrets, you are given the ClickFunnels Unlimited Account as a bonus.

With this account, you can create as many funnels as you wish and have unlimited traffic coming into your funnels.

Russell Brunson will give you a coach who will lead you by the hand, give you priority support, and help you get started in growing your business.

Just like every other ClickFunnels product and offer, Funnel Builder Secrets comes with a 30-day money-back guarantee. If you buy the program and don’t like it, you can get a full refund within 30 days.

As previously mentioned, the Funnel Builder Secrets program came to replace the Funnel Hacks System. If you’ve been familiar with ClickFunnels for a long while, you probably have noticed this change.

With Funnel Hacks, you have access to the following:

For some people, $1,997 could be a scary amount to invest in purchasing a course.

But what if that amount nearly guaranteed your success in making ten times your current sales with the strategies and tools the Funnel Builder Secrets offers?

Would you still invest the money?

If you do a quick analysis, you’ll see how much you save if you purchase Funnel Builder Secrets instead of Clickfunnels alone.

The training offered in the Funnel Builder Secrets program is a fantastic, top-notch program.

The course has helped plenty of marketers make their first seven figures with their businesses, and you could be next if you make this investment.

You get training, coaching, and tools (with a value of $11,552) for you to skyrocket your sales.

$1,997 is a very small investment compared to the value and immense growth your business is likely to experience if you take action and implement the strategies taught.

What if You’re Already Subscribed to Clickfunnels $297/month Plan?

If you’re already a Funnel Hacker (ClickFunnels User) on the ClickFunnels Full Etison Suite plan for $297/month, and you’re serious about multiplying your sales ten times from your funnel, then you should think about getting into the Funnel Builder Secrets program.

The program gives you a good discount, and it offers you crazy, extensive training, and proven strategies that can help you grow your sales.

Funnel Builder Secrets aims to teach you all there is to know about building profitable funnels for your business.

Wait! Before You Leave...​
Get over $5000 worth of training courses with a FREE 14-day Clickfunnels trial
GIVE ME ACCESS!​
Don't miss out on this Exclusive offer​!